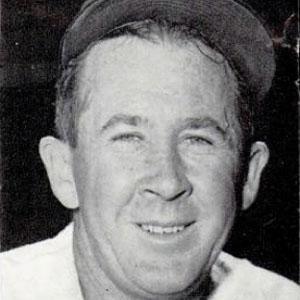 Vermont baseball legend who spent more than 17 years playing in the major leagues, most of them for the Detroit Trigers.

He signed with the Detroit Tigers out of high school, and while attending college spent summers playing semi-professional baseball with future Hall of Famers like Lefty Grove and Carl Hubbell.

He was a three-time All-Star and in 1969, he was voted by fans as the best Red Sox Catcher of all time - despite only spending four seasons with the team.

He was born in Burlington, Vermont, and grew up in Nashua, New Hampshire, where his family moved to a few months after his birth.

After retiring, he was hired by Cleveland Indians GM Hank Greenberg to manage their minor league affiliate.

Birdie Tebbetts Is A Member Of