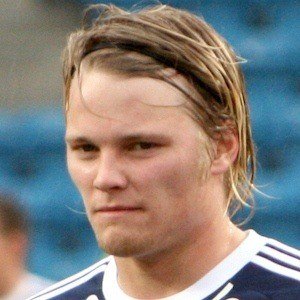 Central midfielder who has has played for the Swiss club FC Basel in the Swiss Super League and the Iceland national football team. He became known after scoring a goal for Iceland in their opening game against Portugal in the Euro 2016, which became his country's first goal in a national tournament.

He was offered a modeling contract by British fashion retailer ASOS via Twitter after playing in the Euro 2016.

He was born in Akureyri, Iceland as Birkir Bjarnason but he is nicknamed Thor. His father also played for the Icelandic national team.

He was given his first opportunity to play soccer for Viking FX at a senior level in 2005 by soccer coach was Roy Hodgson.

Birkir Bjarnason Is A Member Of