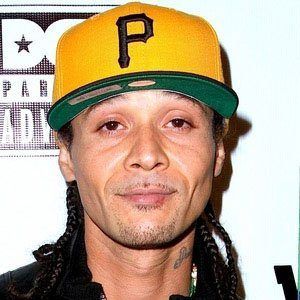 Otherwise known as 'Lil Ripsta, he is a rapper with the Grammy Award-winning group Bone Thugs-n-Harmony. He also pursued a solo career beginning in 1998.

His father kidnapped him and his sisters when they were little and they lived as fugitives in motels and cars for a while.

In 2011 his bandmates officially announced they were leaving the group, but then they reunited a year later.

He was born Bryon Anthony McCane II in Cleveland, Ohio. On February 1st 2020, Bryon married Jessica Nancy Cassidy, also known as JCass. Together they have one child, a son named Jesse Anthony McCane.

He appeared on "America's Most Wanted," talking to host John Walsh about his abusive upbringing.

Bizzy Bone Is A Member Of