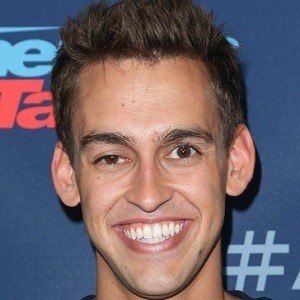 Illusionist best recognized for competing on the 11th season of America's Got Talent. He has also created illusions for magicians like David Blaine and consulted on feature films like Ant-Man and the Now You See Me franchise.

It was at the age of eight that he fell in love with magic after seeing a magician perform at a pizza restaurant in Indiana.

He has never performed the iconic trick of pulling a rabbit out of a hat because he is incredibly allergic to rabbits.

He has occasionally posted photos of his mother on his Instagram. He also performed a magic trick for his grandparents in the June 2016 Instagram video captioned "Magic for my Grandma and Grandpa Vogt."

He has created visual elements for concerts of stars like Kanye West and Avicii.

Blake Vogt Is A Member Of