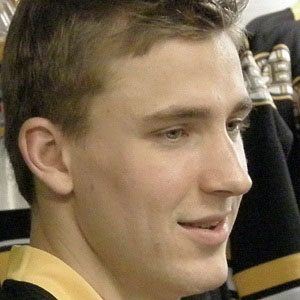 American right winger who became a star player at the University of Minnesota, being named the Most Valuable Player of the 2007 WCHA Final Five Tournament. He later made his NHL debut with the Boston Bruins in October 2008.

He scored a state-high 45 goals in his junior year at Breck School in Golden Valley, Minnesota. He opted to play for the Green Bay Gamblers in the United States Hockey League rather than finish his senior year.

He was named to the 2009 NHL YoungStars Game and was named the game's Most Valuable Player.

He married a woman named Sam.

He has been teammates with Calder Memorial Trophy-winning defenceman Tyler Myers on the Winnipeg Jets.

Blake Wheeler Is A Member Of