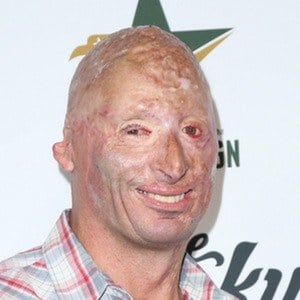 American comedian and motivational speaker who is known for both speaking and joking about his physical transformation which happened after a tour in Iraq. He is also the co-founder of Bravo 748, an organization of veteran speakers and entertainers who focus on overcoming obstacles in life after service.

On April 7, 2007 while on his fourth tour in Iraq, his humvee exploded. He was the sole survivor but suffered from fractured face bones, burns over 40 percent of his body, and a left hand that required amputation. After spending two weeks in a coma, he began his steps towards recovery. After helping fellow soldiers by telling them jokes, he performed stand up at his first open-mike in 2009 which began his career in comedy.

He was featured in an extensive interview in Time Magazine in November of 2013. He is also featured in the documentary Surviving Home which won the Audience Award at the Vail Film Festival in 2018.

He married Connie Strout and together they have three kids.

He was featured and interviewed on the television series Coming Back with Wes Moore where he reflected on both his military experience and performing at different night clubs.

Bobby Henline Is A Member Of