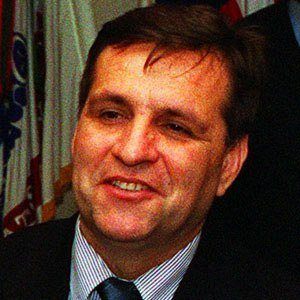 Politician who served as the second President of the Republic of Macedonia from 1999 to 2004. He spent much of his tenure as President trying to quell tensions between ethnic Macedonians and the country's large Albanian minority.

He received a law degree from St. Cyril and Methodius University, and was also active in the Methodist church.

He was killed in a plane crash in a mountainous region of Herzegovina while he was on his way to an economic conference.

His father, Kiro Trajkovski, a man of faith and a soldier in the Bulgarian Army, was once arrested for having provided food to prisoners of war.

He served as President of the Republic of Macedonia at the same time that Shahabuddin Ahmed was in office as the eleventh President of Bangladesh.

Boris Trajkovski Is A Member Of