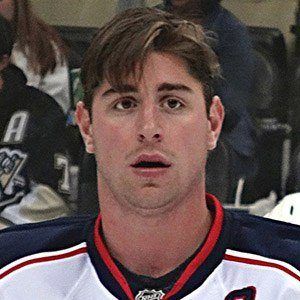 NHL center best known for his time with the New York Rangers and Columbus Blue Jackets. He represented the United States at the 2008 IHFF World Championships, where he scored a hat trick against Norway.

He spent four years with the Portland Winter Hawks in the Western Hockey League before being drafted by the New York Rangers in the first round of the 2004 NHL Draft.

He had a standout NHL rookie season with the Rangers, winning the team's Rookie of the Year honors as well as the Steven McDonald Extra Effort Award for 2007-08.

He proposed to model and former University of Virginia basketball player Brenna McGuire in Mexico. They married in 2012.

Brandon Dubinsky Is A Member Of