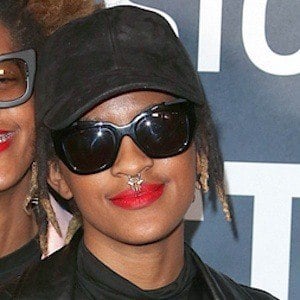 Fashion designer and one-half of the sunglasses design duo known as Coco & Breezy with her twin sister Coco Dotson. Her one-of-a-kind, handmade designs have been worn on the likes of Prince, Beyonce and Keke Palmer.

She and her sister created their sunglass line while still in high school in their parents' home in 2009.

She and her sister spent Fourth of July in New Orleans with Prince were they also performed on stage with him.

She grew up in Apple Valley, Minnesota. She started working at the age of 15 ever since her dad suffered several strokes and was no longer able to work.

She designed the famous three-eyed sunglasses the late Prince wore on SNL.

Breezy Dotson Is A Member Of