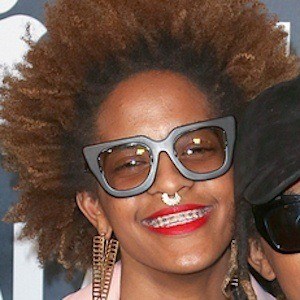 Fashion designer and one-half of the sunglasses design duo known as Coco and Breezy with her twin sister Brianna. They are best known for their handmade, one-of-a-kind designs which have been featured on stars such as Prince, Beyonce and Nicki Minaj.

She and her twin sister founded their line in 2009 out of their parents' Minnesota home.

She and her sister were outcasts growing up and known as the "MySpace twins" with over 30,000 friends in 2005.

She and her sister grew up in Apple Valley, Minnesota. She's half hispanic and half African American.

She and her sister's line appear in Beyonce's music video "Party" in 2011.

Coco Dotson Is A Member Of