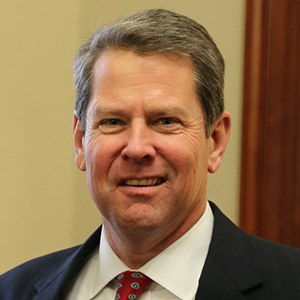 Politician who has risen to fame for his time as Georgia's 27th Secretary of State between 2010-2018. He resigned from his post in November 2018 during his run as the Republican candidate for governor after being accused of voter suppression and democratic backsliding.

He earned his bachelor's degree in agriculture from the University of Georgia. He worked as a home builder before turning to politics.

He served as a Georgia State Senator between 2003-2007. His resignation as Secretary of State was called for during the 2018 gubernatorial elections by former president Jimmy Carter and Georgia NAACP so he could not oversee his own election.

He was appointed Georgia's Secretary of State in 2010 by then-governor Sonny Perdue.

Brian Kemp Is A Member Of