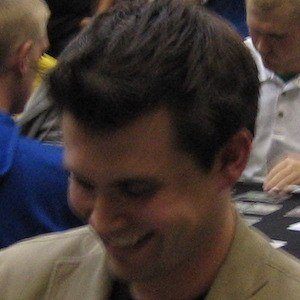 Two-time Magic: the Gathering Pro Tour Champion and a 2010 Magic Pro Tour Hall of Fame inductee who is also one of the initial game designers of the World of Warcraft TCG. He served as the head developer of the game in its first two years. In 2010, he became a founding member of Stone Blade Entertainment, formerly called Gary Games.

He began working as a game designer in 2005 with Upper Deck Entertainment on the development team for the VS System TCG. He would briefly work as the lead developer for the Chaotic TCG at TC Digital Entertainment after Upper Deck.

He is a Twitch star known as bmkibler on the platform with more than 470,000 followers. He earned the nickname The Dragonmaster.

He grew up in Hampstead, NH before attending a boarding school in Massachusetts. He graduated with a degree in Philosophy and Religious Studies from Emory University before moving to San Diego in 2005. His wife's name is Natalie.

He defeated Jon Finkel in the Swiss rounds of the Pro Tour Chicago 2000.

Brian Kibler Is A Member Of