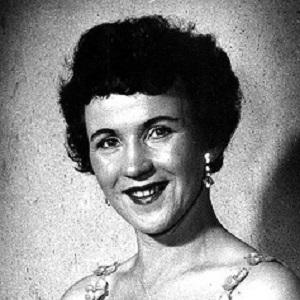 Known for such 1960s and 1970s albums as Bridie Gallagher Sings Irish Requests and In The Heart of Donegal, this internationally-popular Irish singer was nicknamed "The Girl from Donegal." Her most famous singles include "A Mother's Love's a Blessing" and "The Boys From County Armagh."

A native of Creeslough, County Donegal, Ireland, she later settled in Belfast, Northern Ireland, where she signed with the Decca Records label.

She held an audience attendance record for a concert at London, England's Royal Albert Hall, where nearly eight thousand people gathered to hear her sing.

Her marriage to Bob Livingstone resulted in two sons: Peter and Jim. Sadly, Peter died in a traffic accident in his early twenties.

She and the American crooner Bing Crosby both performed music by the Irish songwriter Dick Farrelly.

Bridie Gallagher Is A Member Of