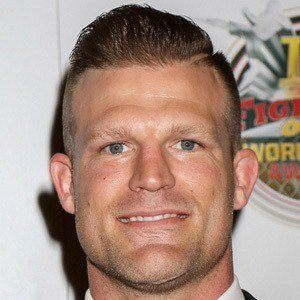 American mixed martial artist who rose to fame after appearing as a contestant on The Ultimate Fighter: Team Carwin vs. Team Nelson. He is known for competing in the welterweight division of the sport.

He fought Ronaldo Souza in the 2012 Strikeforce: Tate vs. Rousey event.

In 2017 it was announced that he would host HGTV's Flip or Flop Vegas series.

He is originally from Fairbanks, Alaska.

Both he and Neil Magny competed on The Ultimate Fighter: Team Carwin vs. Team Nelson.

Bristol Marunde Is A Member Of