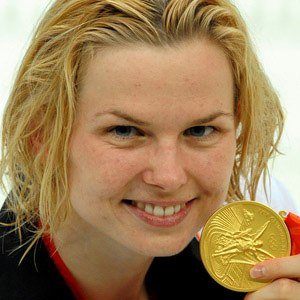 German record-breaking freestyle swimmer. She won gold in the 50 and 100 meters freestyle races at the 2008 Beijing games.

She began competing in the European Junior Championships at the age of 16.

She was born in 1983 in Schwedt, which at the time was located in East Germany. She started dating Paul Biedermann in 2010.

Britta Steffen Is A Member Of