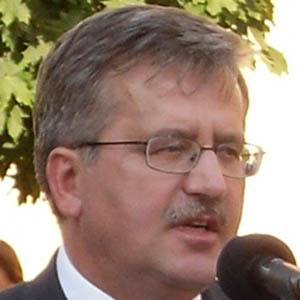 Affiliated, at different points in his political career, with the Independent, Civic Platform, and Conservative People's Parties, he took office in 2010 as President of Poland. Previously, he had served as both Polish Minister of Defense and Marshal of the Sejm.

After graduating in 1977 from the University of Warsaw, he briefly edited a political publication titled Slowo Powszechne.

A political activist involved with the Polish Movement for Defense of Human and Civic Rights, he was arrested in 1979 for his role in organizing a demonstration.

He and his wife, philologist Anna Dembowska, welcomed five children between 1979 and 1989.

He and Lech Walesa both held office as President of Poland; Walesa governed from 1990-1995.

Bronislaw Komorowski Is A Member Of