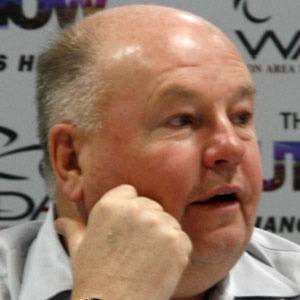 NHL coach who won the Jack Adams Award for the NHL's most outstanding head coach in 2008 for the Washington Capitols.

He played 20 seasons of professional hockey in the NHL and WHA.

He was fired by the Capitols during the 2011 season and then hired by the Anaheim Ducks two days later, becoming the fastest coach to be fired then hired in NHL history.

He has a son named Brady with his wife Crystal.

He coached star forward Alexander Ovechkin on the Capitols from 2007 to 2011.

Bruce Boudreau Is A Member Of