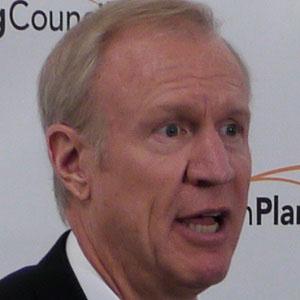 Governor-elect of Illinois who is also the Chairman of R8 Capital Partners. He was an advisor to Chicago Mayor Rahm Emanuel.

He served as the Chairman of GTCR, a private equity firm, for more than 30 years.

In 2008, he was nominated at Philanthropist of the Year by the Chicago Association of Fundraising Professionals. In 2011, he and his wife were nominated for the Golden Apple Foundation's Community Service Award.

He has five children between two wives: three with Diana Mendley and two with Beth Wessel who he separated from in 1990.

He defeated incumbent Governor Pat Quinn in the 2014 gubernatorial election.

Bruce Rauner Is A Member Of