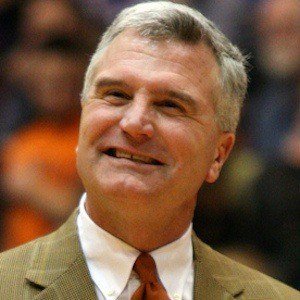 Basketball coach who is known for his career in the men's collegiate ranks. He gained wide renown as the head coach of the University of Illinois' Fighting Illini men's basketball team from 2003 through 2012. He led the team to a 2005 runner-up finish in the NCAA Tournament, and won that year's Naismith Coach of the Year award.

He gained his first coaching experience at Western Kentucky University during the 1979-1980 season under head coach Gene Keady. He then moved with Keady to Purdue, where he worked as an assistant for 18 subsequent years.

In 2012, he was hired as the men's basketball coach for the Kansas State Wildcats. In 2013, he won the Big 12 Coach of the Year award after leading the Wildcats to a 27-8 record and a shared Big 12 conference title.

He has coached a litany of successful professional basketball players, including Deron Williams and Meyers Leonard.

Bruce Weber Is A Member Of