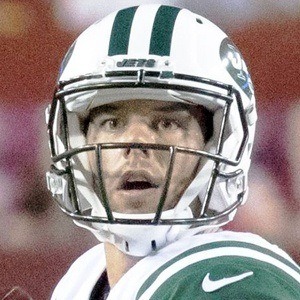 Quarterback who was selected by the New York jets in the fourth round of the 2015 NFL Draft out of Baylor. During his junior season with the Baylor Bears in 2013, he threw for 4,200 yards and 32 touchdowns with just 3 interceptions while leading the team to a Big 12 Championship.

He starred at Midlothian High School, where Rivals.com ranked him as the 25th best pro-style recruit.

In the Tostidos Fiesta Bowl on January 1, 2014, Petty threw for 356 yards and 2 touchdowns while running in another 3 touchdowns in a 52-42 loss to Central Florida.

He was born in Thomaston, Georgia to Todd and Dena Petty.

As a freshman he was a backup behind Heisman Trophy winner Robert Griffin III.

Bryce Petty Is A Member Of