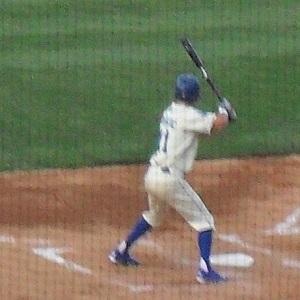 MLB outfielder who was selected as the fifth overall pick by the Kansas City Royals in the 2011 MLB Draft. He was offered a $7.5 million signing bonus by the Royals, the largest ever for a prospect out of high school at the time.

He was born Derek Starling and was All-State in baseball, football and basketball at Gardner Edgerton High School.

He was one of the nation's highest-rated quarterback prospects coming out of high school and turned down a scholarship to the University of Nebraska to sign with the Royals.

His parents are Deb and Jimbo Starling. He has a sister named Jamie.

He has been represented by famed sports agent Scott Boras as a professional baseball player.

Bubba Starling Is A Member Of