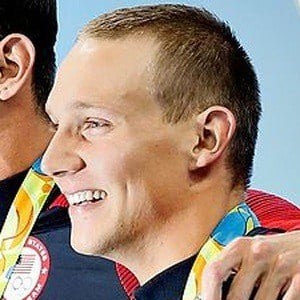 Freestyle and butterfly swimmer who specializes in sprinting events. A seven-time Olympic gold medalist, he set records on the 50 and 100 meter freestyle.

He won six medals, including one gold, at the 2013 FINA World Junior Swimming Championships in Dubai.

He won seven gold medals at the 2017 World Aquatics Championships in Budapest.

His siblings are named Sherridon, Kaitlyn, and Tyler. He and his wife Meghan wed on February 13, 2021.

He won the 4×100 meter freestyle relay at the 2016 Olympics with Michael Phelps.

Caeleb Dressel Is A Member Of