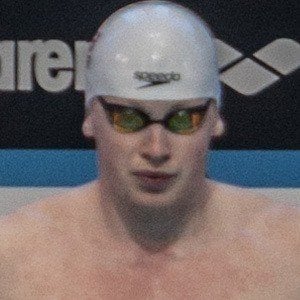 British swimmer who burst onto the international swimming scene in 2014, winning four gold medals at the LEN European Aquatics Championships and three gold medals at the Commonwealth Games. That year, he was nominated for the the BBC Sports Personality of the Year Award. He won Olympic gold in 2016 and 2021.

He was born in Uttoxeter, Staffordshire and was mentored by Olympic gold medalist Rebecca Adlington.

His parents are Mark and Caroline Peaty. He and Eiri Munro have a son together named George-Anderson Adetola Peaty who was born on September 11, 2020.

He and Norway's Alexander Dale Oen are both European Champions in the men's 100-meter breaststroke.

Adam Peaty Is A Member Of