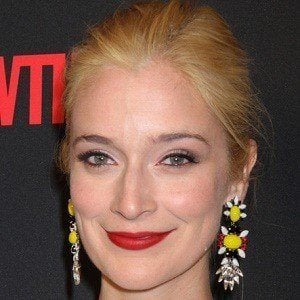 Actress and filmmaker best known for her portrayal of Libby Masters in the Showtime series Masters of Sex. She also starred in and co-wrote the independent film Like the Water.

She found solace in acting as a child, performing in community theater. She later attended the Tisch School of the Arts and spent time at the Royal Academy of Dramatic Art in London, England.

She has made guest appearances in shows like Blue Bloods, Gossip Girl, and The Walker.

She was raised in Camden, Maine. Her father, Des, is the former CEO of the ContiGroup and her mother, Pam, is the author of Knitting for Dummies. She has a younger brother named Ryan and two half brothers named Alexander and Cooper.

She stars alongside Michael Sheen and Lizzy Caplan in Masters of Sex.

Caitlin Fitzgerald Is A Member Of