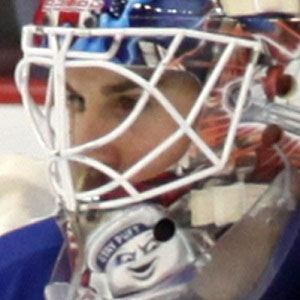 Goalkeeper who signed with the New York Rangers in 2010, and made his NHL debut for the team on October 24, 2013. He was then traded to the Edmonton Oilers in 2015.

He began his junior hockey career with the OPJHL's Hamilton Red Wings in 2004; his record was 44-18-3 during his three years with the team.

He was named the CHA Tournament's Most Valuable Player in 2010 while leading the University of Alabama in Huntsville.

He first made the Rangers roster as a backup to star goalkeeper Henrik Lundqvist.

Cam Talbot Is A Member Of