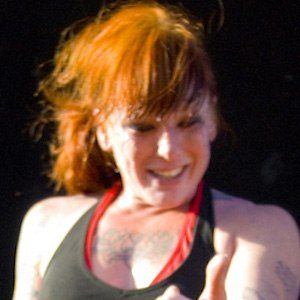 Metal vocalist known as one fifth of the Detroit-born band Walls of Jericho. The band began in 1998 but went on a hiatus in 2001 until their reformation two years later. The band has since released over half a dozen successful albums and EPs.

She spent two years singing with the band Apathemy before she auditioned for Walls of Jericho in 1998. Not long after joining, the band began touring around Detroit.

She and her husband spawned a musical side project called The Beautifuls during a Walls of Jericho hiatus.

Her husband, Frankie, is the guitarist for the Boston-born band Death Before Dishonor. In 2011, they gave birth to a daughter named Patsy.

In 2003, Alkaline Trio drummer Derek Grant briefly joined her in Walls of Jericho.

Candace Kucsulain Is A Member Of