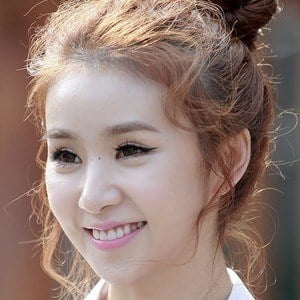 Best recognized as one member of the five-piece South Korean pop group Fiestar. The group released their first EP Black Label in 2015 and followed with A Delicate Sense in 2016.

Prior to the formation of Fiestar in 2012, she debuted as a soloist in China after winning a 2004 CCTV singing contest. She released the album Cat the following year.

She has been a cast member on several variety shows including Real Men Season 2 and We Got Married. She also made her acting debut in 2017's Missing Nine.

She was born in Zhangjiajie, Hunan, China.

She is joined in Fiestar by Kim Jin Hee, Im Min-ji, Kim Hye-mi, and Lee Ye-ji.

Cao Lu Is A Member Of