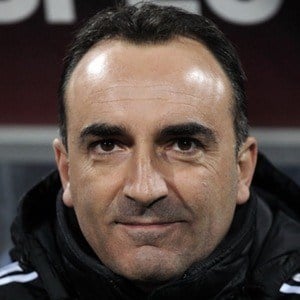 Portuguese soccer player and coach known for his career in the Primeira Liga in both capacities. In 2015, he took over as coach of Championship side Sheffield Wednesday in 2015, leading them to an unlikely 3-0 win over Arsenal in that year's League Cup.

He played his youth soccer with Braga from 1978 to 1983 before making his senior debut with the team. He retired in 1998, having played in nearly 200 Primeira Liga matches.

He grew up in Braga, Portugal.

He and Brian Laws have both served as manager of Sheffield Wednesday.

Carlos Carvalhal Is A Member Of