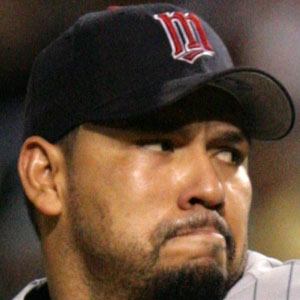 Former MLB pitcher best remembered for his days with teams like the Minnesota Twins and Seattle Mariners. He also represented his native Venezuela at the 2006 World Baseball Classic.

He signed with the Philadelphia Phillies as an amateur in 1996 but was not called up to the majors until 2002.

During his 2005 season with the Twins, he set an MLB record by allowing just .43 walks per 9 innings.

He has a son named Justin and a daughter named Gabriella.

He was teammates on the Twins with Cy Young Award-winning pitcher Johan Santana.

Carlos Silva Is A Member Of