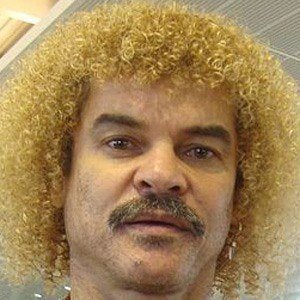 Midfielder nicknamed "El Pibe" who became known as much for his dazzling passes as he was for his trademark blonde afro and sparkling jewelry. He was a member of the Colombian national team from 1985 to 1999, two-time South American Footballer of the Year, and MLS MVP with the Tampa Bay Mutiny in 1996.

He began his professional career with Union Magdalena in 1981.

He was on the cover of the video game International Superstar Soccer 98 developed for PlayStation and Nintendo 64.

He fathered three children with his wife Claribeth.

He joined the MLS's Tampa Bay Mutiny in 1996, doing his part to promote the league abroad, long before David Beckham and other superstars of the European leagues went to the MLS.

Carlos Valderrama Is A Member Of