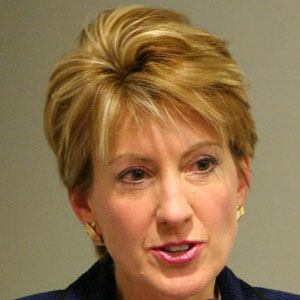 Republican politician and telecommunications executive. She ran unsuccessfully for a California seat in the United States Senate and served in the early 2000s as CEO of Hewlett-Packard. She also unsuccessfully ran to be the Republican Party's 2016 nominee for president.

She graduated from Stanford University in 1976 with a degree in medieval studies and philosophy. After briefly attending law school at the University of California-Los Angeles, she earned an MBA from the University of Maryland, College Park and an MS from the Massachusetts Institute of Technology's management program.

She began her business management career in 1980 as an executive with AT&T. She began heading Hewlett-Packard in 1999.

She grew up in Austin, Texas as Cara Carleton Sneed. Following the break up of a seven-year marriage to Todd Bartlem, she wed Frank Fiorina in 1985.

She advised fellow Republican politician John McCain during his 2008 bid for the United States presidency.

Carly Fiorina Is A Member Of