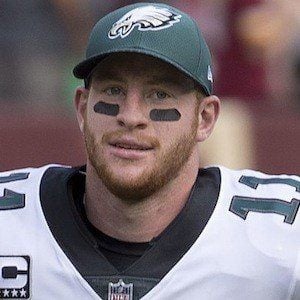 Quarterback who was selected second overall in the 2016 NFL Draft by the Philadelphia Eagles. He helped the Eagles earn the top seed in the 2017-18 NFC Playoffs, which led to the team capturing its first ever Super Bowl title in Super Bowl LII.

He began his career as both a quarterback and defensive back for Bismarck Century High School. He went on to play college football at North Dakota State University.

He was named NCAA Division I Championship Game Most Outstanding Player in 2015 and 2016.

He was born to Doug Wentz and Cathy Domres. He has two brothers: Zach and Luke. His father was a linebacker at Northern State and his brother was a starting pitcher for North Dakota State University. He began dating his girlfriend Madison Oberg in 2017. They became engaged in February 2018 following his Super Bowl win, and they married in July 2018. Their daughter Hadley Jayne was born on April 27, 2020. In November 2021, the couple welcomed a daughter named Hudson Rose.

He and fellow quarterback Jared Goff were the top two picks in the 2016 NFL Draft.

Carson Wentz Is A Member Of