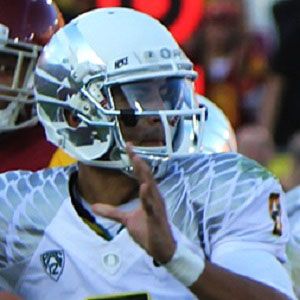 Quarterback who won the 2014 Heisman Trophy after leading the University of Oregon to a Pac-12 Championship. He was also named the Tostitos Fiesta Bowl MVP in 2013. In 2015, he was selected second overall in the NFL Draft by the Tennessee Titans.

He was the #12 ranked quarterback in the nation after finishing his senior season at Saint Louis School.

He redshirted his freshman year of college and became starting quarterback the following year. He threw for 31 touchdowns and ran in another 9 during the 2013 season, his sophomore year with the Ducks.

He was raised with a brother named Matthew.

He was teammates with running back Lamichael James during the 2011-2012 NCAA season.

Marcus Mariota Is A Member Of