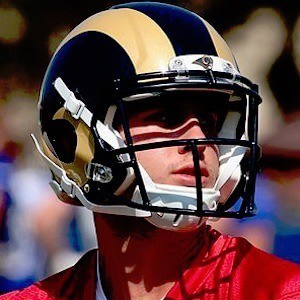 Quarterback who was selected first overall in the 2016 NFL Draft by the Los Angeles Rams. He helped the Rams reach Super Bowl LIII in 2018-19.

He played high school football for Marin Catholic High School and had a 39-4 career record. He then became the first true freshman to start at quarterback for the University of California.

In 2015, he led the California Bears to an 8-5 record, their first winning season in four years. He held more than 20 school records by the end of his junior season, after which he declared for the NFL Draft.

His parents are Jeff and Nancy. His father played baseball as a catcher for seven years in the MLB. He became engaged to Christen Harper in June 2022.

He became teammates with running back Todd Gurley on the Rams.

Jared Goff Is A Member Of