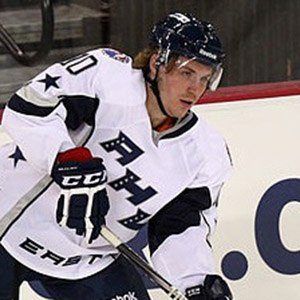 NHL centre selected by the New York Islanders in the fourth round of the 2009 NHL Entry Draft. He previously spent four seasons with the OHL's Mississauga St. Michaels Majors, where he was a captain and led the team to the championship series.

He was born in Toronto and made his Ontario Hockey League debut with the Majors in 2007, scoring 41 points in his first season.

He was convicted of manslaughter in 2009 after inadvertently causing a head injury to Manny Castillo during a rugby game. He was sentenced to a year of probation and one hundred hours of community service.

He has been in a relationship with Kristy Rosenberg.

Casey Cizikas Is A Member Of