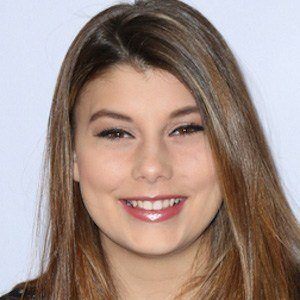 Actress cast in the title role of Zoey in the 2015 movie Zoey to the Max who has also appeared in Make Your Mark and other various television roles.

A chance meeting with Ryan Gosling on Catalina Island sparked her acting career. She soon after enrolled in a one-week acting camp.

She started a non-profit organization called Love Gives Chances in support of foster kids like herself. She served as a featured adoption advocate for the 15th annual National Adoption Day.

She was a foster child in the Texas foster care system for more than 2,000 days. She was adopted by Jenn McKown at the age of six. Her biological older sister was sent to live with their biological father when Cassidy was five, a situation that did not suit Cassidy.

She starred alongside Amy Smart and Grant Bowler in Zoey to the Max.

Cassidy Mack Is A Member Of