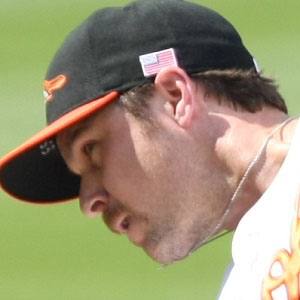 MLB relief pitcher who became known for his unconventional, submarine style of pitching. He played for six major league teams from 1998 to 2009, including the Chicago White Sox, Oakland Athletics and Tampa Bay Rays.

He attended Byram High School in Byram, Mississippi before going to play college baseball at Hinds Community College and the University of Southern Mississippi.

He was featured prominently in Michael Lewis' influential book Moneyball as well as the Oscar-nominated 2011 film of the same name.

He married his high school sweetheart Jenny. He has children named Lanie and Walker.

He and All-Star Tim Hudson both pitched for the 2002 and 2003 Athletics teams which were profiled in Moneyball.

Chad Bradford Is A Member Of