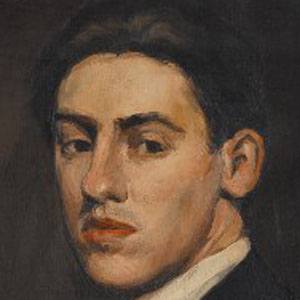 Watercolorist and oil painter whose best-known works included 'I Saw the Figure 5 in Gold' and 'Wild Orchids.' He would honor such friends as Gertrude Stein, Eugene O'Neill, Arthur Dove, and Georgia O'Keeffe with his art.

He studied at both Drexel University and the Pennsylvania Academy of Fine Arts. He met Marsden Hartley while in Paris and was immediately accepted into Hartley's group of American artists.

He created nine poster portraits in honor of his famous friends. The most famous of these works, 'I Saw the Figure Five in Gold,' was inspired by William Carlos Williams' poem 'The Great Figure' from 1921.

He lived and studied for a time in Paris and found the avant-garde art community there to be accepting of his homosexuality.

He painted a portrait of John Marin.

Charles Demuth Is A Member Of