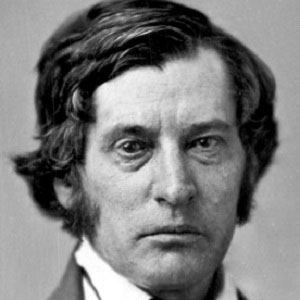 From 1851 until 1874, this Civil War-era Radical Republican leader served his home state of Massachusetts as a United States Senator. Remembered for his fervent, Reconstruction-era advocacy of equal rights for those freed from slavery, he was also a passionate abolitionist during the Antebellum period.

He earned his undergraduate and law degrees from Harvard and subsequently practiced law in Boston.

He once suffered a near-fatal beating on the floor of the Senate by an infuriated South Carolina Representative. He counted among his friends (and, later, pallbearers) literary luminaries Ralph Waldo Emerson and Henry Wadsworth Longfellow.

The son of an attorney and abolitionist father, he spent his youth in Boston, Massachusetts. His brief, unhappy marriage to Alice Mason Hooper ended in divorce in 1873.

Though Sumner objected to President Abraham Lincoln's Civil War-era treatment of the South, which he regarded as not radical enough, he was an important foreign affairs adviser to Lincoln. Most importantly, he helped Lincoln cultivate a relationship with the French and English that brought those countries to the aid of the Union, rather than the Confederacy, during the Civil War.

Charles Sumner Is A Member Of