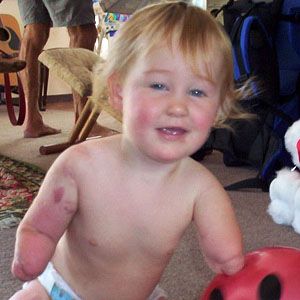 Known as "Miraculous Baby Charlotte," this New Zealand girl survived bacterial meningitis as an infant, losing all four of her limbs to the disease. She was subsequently the face of a nation-wide meningococcal disease vaccination campaign.

She was born over a decade into a severe New Zealand meningitis epidemic. She became ill at seven months old and was transported by helicopter to Starship Children's Health in Auckland City, New Zealand.

During her childhood years, she frequently attended Camp No Limits with other young amputees.

She grew up in Waiheke Island, New Zealand, as the daughter of Percy Bisman and Pam Cleverley.

She and Paralympic athlete Amy Purdy both lost their legs as a result of meningitis.

Charlotte Cleverley-Bisman Is A Member Of