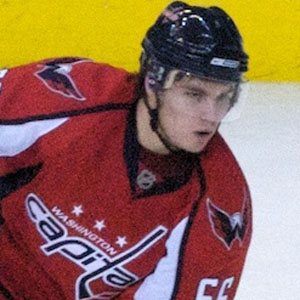 Son of the hockey Hall of Famer Ray Bourque. He played left wing for the Boston Bruins and Washington Capitals.

He was picked in the 33rd overall in the the NHL draft of 2004, and was assigned to the Washington Capitals' developmental league affiliate, Hershey Bears.

He played internationally with the U.S. in the World Junior Championships, scoring 7 goals in 7 games in 2006.

He married his longtime girlfriend, Kimberly McManus, in summer 2011; the two welcomed their first child in 2012.

His father was Ray Bourque, the famous #77 for the Boston Bruins and Colorado Avalanche.

Chris Bourque Is A Member Of