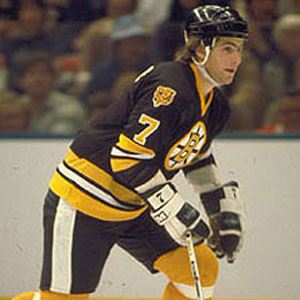 Hall of Fame defenseman for the Boston Bruins who spent 21 years with the team, setting position records for career goals, assists and points.

After standout performances in the Quebec Major Junior Hockey League, he was drafted eighth overall by the Bruins, and scored a goal in his very first game.

He won two Olympic gold medals and a silver with Team Canada, as well as a Stanley Cup Championship with the Colorado Avalanche in his last NHL season.

He married Christiane Bourque, and both of his sons followed him into the NHL.

He was a close friend of fellow Hall of Famers Wayne Gretzky and Mark Messier, both of whom retired a few years before he did.

Ray Bourque Is A Member Of