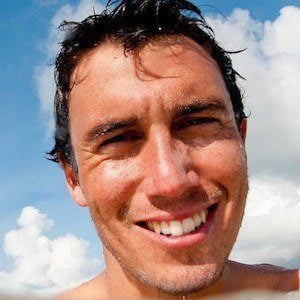 Landscape and lifestyle photographer who first rose to fame for his stunning surf photos featured in publications like Surfline and Transworld Surf. He has since worked with countless prestigious clients and earned more than 3.7 million posting his photos to Instagram.

A self-taught photographer, he became interested photography as an art form while studying at Cuesta Junior College. He bought his first camera for $65 at a Goodwill auction.

He has published several photo books of his work and, in 2015, released the children's story The Boy Who Spoke To The Earth.

He was raised by a single mother until the age of twelve when she remarried into a family of five. He married wife Breanne in 2007 and the two have two sons, Jeremiah and Forrest.

Both he and Sam Earp are popular landscape photographers on Instagram.

Chris Burkard Is A Member Of