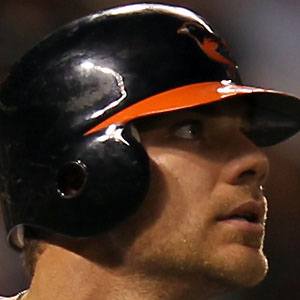 Power hitting MLB first baseman who had his breakout season with the Baltimore Orioles in 2013, leading the Major Leagues with 53 home runs and 138 RBIs.

He showed flashes of brilliance with the Texas Rangers, batting .318 over October and November of 2009.

After being traded to the Orioles, he hit the first grand slam of his career in a game against the Yankees, and in 2013 set an MLB record by compiling 16 RBIs in the first four games of the season.

He married Jill Davis in 2011 and he has a daughter named Ella.

During his 2013 breakout campaign, he battled, and beat, Tigers third baseman Miguel Cabrera for the American League home run and RBI titles.

Chris Davis Is A Member Of