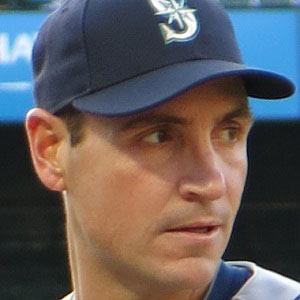 6'10" MLB starting pitcher who debuted with the Texas Rangers in 2004 and was selected to his first All-Star game as a member of the San Diego Padres in 2007. He was named the American League Comeback Player of the Year with the Seattle Mariners in 2014 and in 2015, he won a World Series Championship as a member of the Kansas City Royals.

He excelled in both baseball and basketball at Highland Park High School in Texas.

He was a third round pick of the Pittsburgh Pirates in 2000. He would spend time with the minor league affiliates of the Pirates and Montreal Expos before joining the Texas Rangers' organization and making his MLB debut in August 2004.

He married Elizabeth Patrick and the couple had their first child, a daughter named Catherine, in 2008, followed by a pair of sons in 2010 and 2012.

He and strikeout specialist Jake Peavy held down the top of the Padres rotation for multiple seasons before Young's shoulder began acting up.

Chris Young Is A Member Of