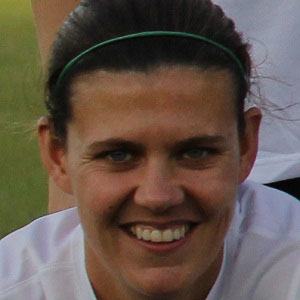 Canadian striker and attacking midfielder who debuted professionally for the USL W-League's Vancouver Breakers in 2001. She played for Canada during the 2015 Women's World Cup. In early 2020, she broke Abby Wambach's record for most international goals scored in soccer among men and women.

She played college soccer at the University of Portland.

She first started playing for Canada's national team in 2000. She won the Lou Marsh Trophy - given to Canada's top athlete - in 2012.

She was born to Sandra and Bill Sinclair and has a brother named Mike.

She and Sophie Schmidt have played together on Canada's national team.

Christine Sinclair Is A Member Of