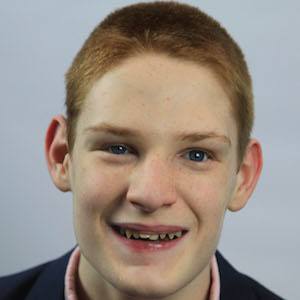 Blind and autistic soul singer who went viral after recording the song "Open the Eyes of My Heart" on YouTube. He has received media coverage from networks such as USA Today, The Huffington Post, and FOX. He was featured on ABC's 20/20: Young & Gifted digital spin off series.

His first performance was singing the Star Spangled Banner in first grade at a Memorial Day assembly. He went viral on the internet at 10 years old.

He was named one of 10 Amazing Individuals with Autism who Shined by Autism Speaks in 2013. He launched a podcast called Mission Possible in 2016.

He was born prematurely in Florida, where he entered the foster care system. He was later adopted by a family in Manchester, New Hampshire. He began singing at the age of four, before he could hold a conversation. His sister Grace also sings with him and is featured on his second album Believer. She is also featured in some of his most popular YouTube videos.

He performed during Pope Francis's 2015 visit to Philadelphia.

Christopher Duffley Is A Member Of