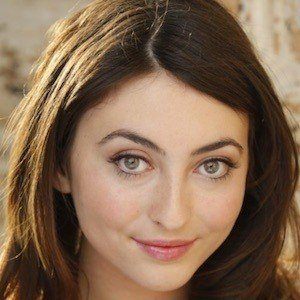 Rising actress, as well as photographer and filmmaker, who became best known for her recurring role as Sydney on MTV's Teen Wolf.

She starred in the Theatricum Boticanicum production of To Kill a Mockingbird as Mayella Ewell. She directed and co-starred in the 48 Hour Film Project movie Headache that also starred her sister Lily Bleu Andrew and Cassandra Sage Briskman.

She and her family took residence in Los Angeles, but have traveled the country for her and her sister's acting careers.

She has been featured alongside Holland Roden, Khylin Rhambo, Shelley Hennig, Victoria Moroles and the rest of the Teen Wolf cast in multiple episodes of the show.

Claire Bryétt Andrew Is A Member Of