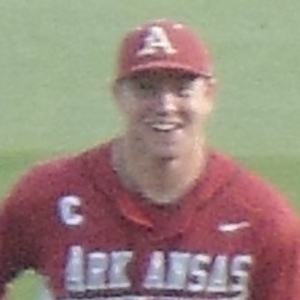 Professional baseball relief pitcher who was taken 73rd overall by the Miami Marlins in the 2013 MLB Draft. He made his professional debut in the minor leagues that same year.

He attended the University of Arkansas, where he set a school record with 13 saves as a junior. He then gave up his final year of eligibility to sign with the Marlins.

Ten of his teammates on Arkansas were also drafted in 2013. He was nicknamed "Bulldog" in college.

He grew up in Sulpher Springs, Texas.

Colin Moran was also selected by the Marlins in 2013.

Colby Suggs Is A Member Of