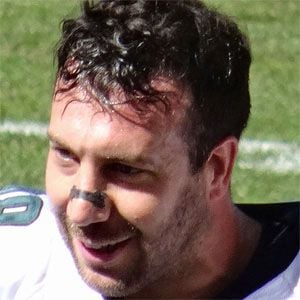 Outside linebacker who was drafted 46th overall by the Houston Texas in 2009. He recorded 5 sacks and 82 tackles during his first season with the Eagles in 2013.

He was an All-State football player and All-League basketball selection his senior season at the University of Detroit Jesuit High School.

He had 53 tackles and 12 sacks in his First-team All-Big East senior season at the University of Cincinnati.

He is the son of Margaret Bailey and Tom Barwin. In April 2017, He married longterm girlfriend Laura Buscher.

He broke the single-game sack record for the Texans with four in 2011; the record was previously held by Mario Williams .

Connor Barwin Is A Member Of